skip to main | skip to sidebar

MadMen tee available for next 24 hours! 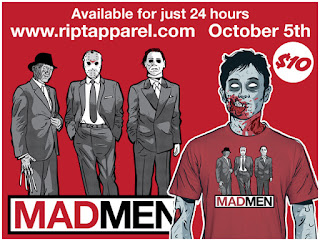 Today's tee over at Ript Apparel is my MadMen design.  Only available for the next 24 hours so grab one now before it's gone.
www.riptapparel.com
Posted by Nik Holmes at 03:36 6 comments:

Best of British - The Cottage

"The children have found a young man tied up in the Barn.
He had no face" 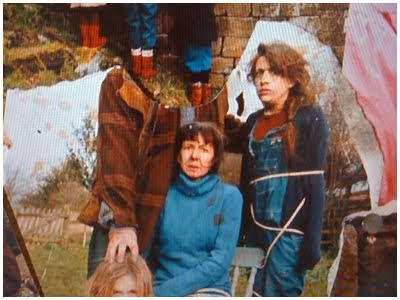 "The Cottage is a relentless dark comedy with an extreme twist. Bickering brothers David (Andy Serkis) and Peter (Reece Shearsmith) kidnap Tracey (Jennifer Ellison) in a desperate moneymaking scheme and hide out in a remote cottage from her ganglord father. However, feisty Tracey turns the tables on her bungling captors and escapes into the woods with Peter as her hostage. Only this land belongs to a maniacal farmer and he doesn't like trespassers... Cue a grotesquely comic battle for survival - who will survive and what will be left of them? "

Ever since I saw the poster for this it intrigued me. Obviously British, judging by the three stars, and with a thick band of black humour running through it judging by the comically macabre expressions on display. Unfortunately it seemed to come and go without me realising and it was only recently that I got a chance to savour it's foul mouthed farmyard horror shenanigans. 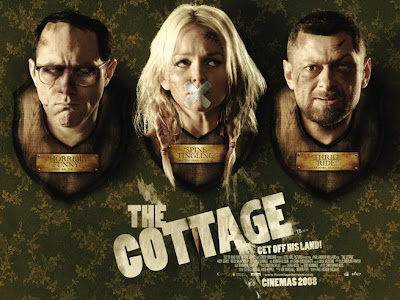 The Cottage is having alot of fun with itself and is similar in some ways to Dusk Till Dawn in the sense that it's narrative is split evenly between two genres, the gangster flick and the horror flick. But whereas Dusk had Tarantino cool gangsters as it's inspiration, The Cottage is more Guy Ritchie does Ealing Studios with it's mix of incompetant ne'er do wells and it's generous dose of salty language (mostly thanks to Jennifer Ellison who really seems to be having alot of fun). How Danny Dyer escaped a role in this movie is beyond me however.

Unfortunately this first act seems to play out a little longer than I would have liked and as enjoyable as it is to watch the talents of Andy Sirkis I had trouble maintaining interest when we know that their should be some horror a-happening. Thankfully things take a lovely turn for the creepy when the action shifts from the cottage to the farm, though unfortunately the tension is shortlived as we are quickly onto the bloodshed!

Head's in the Shed

The film was lovely and gruesome with plenty of carnage, but while the first act seemed to linger too long on the bungled kidnapping the third act carnage is upon you alot quicker than I would have liked. I'd have preferred a quicker introduction to the creepy farm, more poking around Scooby Doo style and then the blood letting arriving at around the same point, and I fear that it is that unbalanced storytelling which let's the movie down. This is a real shame as the UK really doesn't have a good slasher movie under it's belt and this could have been a contender given a stronger hold on the storytelling reins. It's creepy, it's gory and it has a kickass killer. 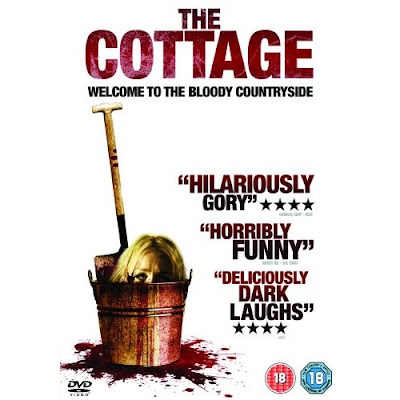 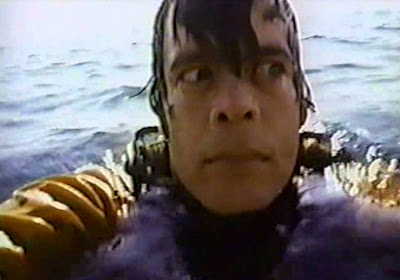 I've just watched the trailer for old school J-Horror action 'The House Where Evil Dwells' and was reminded that it starred my old childhood hero Doug McClure, who I used to love as a child thanks to his ass kickin' monster fighting ways in movies such as 'Warlords of Atlantis' and 'The Land that Time Forgot'. 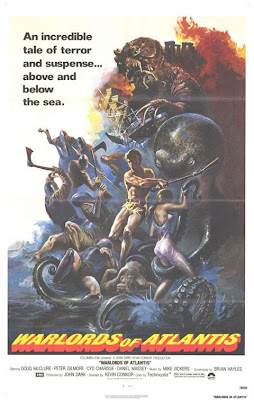 To me he was as cool as Han Solo and Flash Gordon back in the day, a square jawed two fisted hero of yesteryear. 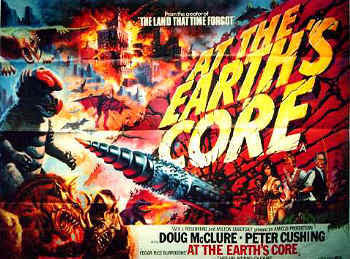 So imagine my surprise when I visited his IMDB page and was confronted with this! 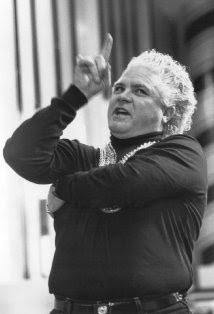 Granted, he was already looking a little worse for wear when I saw him last in 'Humanoids from the Deep', but still...
Posted by Nik Holmes at 10:19 No comments:

We Live! We Live Still!! 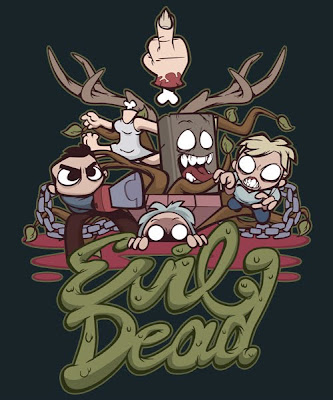 This is a double post from my illustration blog, but figured it was horror themed enough to warrant some interest from my horror friends too (hopefully). Little bit of fun, intending to make a start on images which have a bit more going on in them and figured I'd start with The Evil Dead movies. There are so many iconic images in those movies (flying eyeballs, skull hilted daggers, old clocks, reel to reel player and giggling lamps) that I may revisit this when I have more time. Meanwhile I hope people enjoy the break from Red Band trailers for Hatchet 2.
Posted by Nik Holmes at 07:02 1 comment: 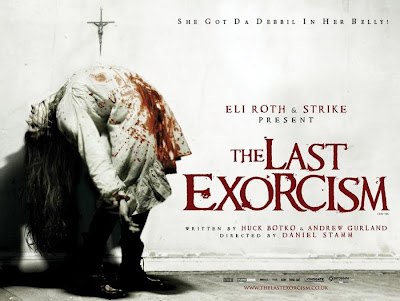 Despite the Exorcist and Exorcist 3 ranking among my favouritest of horror movies, I have something of a troubled history with Exorcism and possession films in general (Debbil movies) in so far as they are always shit. Not Exorcist 2/Richard Burton drunken priest shit, no, the bad kind of shit. Recently this genre has leaned heavily towards the whole 'based on true events' angle which of course instantly lowers your expectations of anything truly spectacular happening - no headspinning, no levitating, just grunting and sweating. For some reason Hollywood seems to think the 'It could have happened!' angle is the scariest part of a debbil movie. 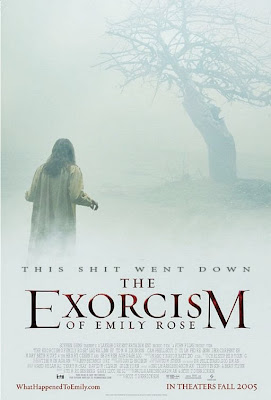 When actually THIS is the scariest part of a Debbil movie.


My self imposed embargo on any information regarding films which look at all of interest means I went into TLE with literally no idea of what to expect. I didn't know it was a PoV horror movie for a start, a genre which I genuinely love. PoV horror really throws you into the thick of things and if said 'things' are firing on all cylinders you're left with a great experience, ala Blair Witch, Rec and that other one with the demon in the loft. Of course if you start messing with the formula, ala Romero in Diary of the Dead, adding music to 'heighten the drama', things soon fall apart. Just as things were looking promising TLE also started to throw in some spooky music themselves, and again I found myself jolted out of the movie as I wondered 'Who added the music? Was that in post production? Didn't she jump of the ski lift on Curb Your Enthusiasm?' and other such inconsequentials. This additional music also cheats the audience. Someone has edited this footage, someone has shaped it into a narrative and added a score. Or at least that is the definite implication made. Which then leads you to form certain conclusions as to the films outcome. These conclusions are wrong, and it's this level of not so clever manipulation which left a bad taste in my mouth. It's a cheat, and really let's the film down. But then again it appears the movie has alot of these 'cheats' attached, at least as gfar as the marketing is concerned. After seeing the movie I saw this poster. 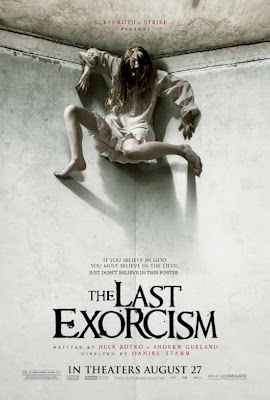 Bollocks, that doesn't happen and suggests a much more other worldly experience than the one you receive. Just as things do start to take a turn for the creepier and we head off to the ('Emily Rose' style) barn for the big showdown and titular exorcism the story is wrapped up Nancy Drew style at a speed which is so fast it made my head spin (ho ho!)

I wanted to like the movie, and was doing so, but after a steady build it came to an abrupt ending and then this happened... 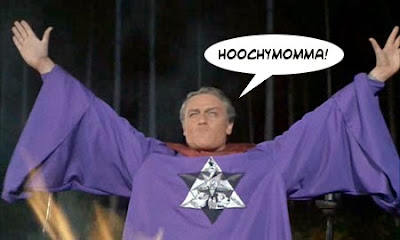 ...or at least that's how it felt. Perhaps truly the strangest ending I have seen in the cinema for a long time, and for all the wrong reasons. Not since I saw Ghostbusters as a kid have I heard such audience participation from a UK audience. But whereas in 1985 people were singing along in unison to the Ghostbusting antics on screen, here there was simply a loud, audible series of grunts, 'shit' and 'bollocks'. One 'woman' wouldn't quit announcing what a pile of shit the whole affair was for about five minutes straight, even when her friend asked her to stop. She then capped off this seering critique with the query 'Did she kill herself then?' Anyone who has actually seen the film will be left as puzzled as I was by this statement. Dozey Mare.

Where TLE does score highly though is with it's lead, Patrick Fabian, whose charisma and overall charm carries the whole movie along. The early scenes as he demonstrates how he performs his exorcist routine,e intercut with the actual 'performance' were a highlight of the movie for me, and the way his motivation for what he is doing is explained is really involving and well done. Hats off to all involved in these scenes.
Posted by Nik Holmes at 15:29 2 comments:

Over at the Strange Kid's Clubhouse you can practice your ABC and brush up on your knowledge of horror characters all at the same time with Granny Grimms Ghoulish Book of Grammar! A new page every week, check it out!
Posted by Nik Holmes at 08:15 1 comment:

This is a little old now but I'd be very surprised if anyone had seen it. Watching City of the Living Dead has inspired me to create a Fulci cartoon in my just made up this morning series of ZombeeCoffee cartoons. So with that in mind I figured I'd dig this one up and put it on here for all to see. I've tweaked it a little since then, and cheekily added Richard Band's 'original' theme.
Posted by Nik Holmes at 00:31 1 comment: